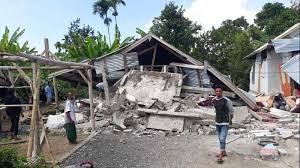 Just a week after a 6.4-magnitude quake hit the island of Lombok, West Nusa Tenggara (NTB), a 7.0-magnitude earthquake rocked the same area on Sunday.

According to the Meteorology, Climatology and Geophysics Agency (BMKG), the earthquake occurred at 7:46 p.m. local time with the epicentre located 18 km southwest of East Lombok with a depth of 15 km.

The agency initially placed the northern part of East and West Lombok on a tsunami alert soon after the quake but the alert was revoked at around 9:30 p.m. local time.

The tremor was felt in neighbouring Bali and some parts of East Java.

As of Aug. 9 evening, the BNPB has recorded at least 259 deaths and 1,033 injuries as a result of the quake. Thousands of buildings were damaged and 270,168 of people fled their homes after the tsunami alert.

The worst hit area was North Lombok regency, where at least 72 people were killed and 64 were injured. Sutopo said most of the deaths were caused by falling building debris.

A magnitude 5.9 earthquake struck Lombok Island in West Nusa Tenggara on Thursday afternoon, only four days after a magnitude 7 earthquake devastated the island.

According to the Meteorology, Climatology and Geophysics Agency (BMKG), the earthquake’s epicentre was located 13 km northwest of the provincial capital of Mataram. The authorities have not issued a tsunami warning.