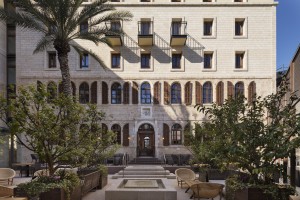 The Setai brand of hotels has recently opened its latest property The Setai Tel Aviv, located on the Mediterranean Sea at the entrance to the ancient city of Jaffa. The 120 guest room and suite urban resort is the second Setai property in Israel following the 2017 opening of The Setai-Sea of Galilee and is the fourth property in Israel to be designated as a member of the Leading Hotels of the World organization (together with the Mamilla, American Colony and King David hotels).

The property was initially constructed as a fortress during the Crusader Kingdom’s rule over Jaffa in the 12th-century. The Setai Tel Aviv’s five-building complex, referred to locally as the “Kishle,” or “jailhouse” in Turkish, is amongst the most important properties in Israel from a historical, cultural and architectural perspective. The building was part of a complex that was conquered and then inhabited by the most dominant empires in history beginning with the Crusader period and through the Roman, Byzantine, Napoleonic, Turkish-Ottoman and British rule over Jaffa. Following the fall of the Ottoman Empire and Israel’s War of Independence in 1947, the complex was used as a police station until 2005, at which point it underwent a monolithic restoration process that transformed the building into The Setai Tel Aviv.

The original buildings and stone corridors that wrap around an inner courtyard have been meticulously restored over the span of a 25-year preservation process, which was spearheaded by the Israel Antiquities Authority, Israel Preservation Society, Feigin Architects & preservation architect Eyal Ziv.  As part of the renovation effort, architects demolished several buildings, restored the original structure, added three floors and dug out a basement level.  The latter spurred a series of extensive archeological digs throughout the property, unearthing artifacts that date back to the 12th century, all of which will be on display in the The  for guests’ enjoyment.

The Setai Tel Aviv features JAYA, a new restaurant concept which celebrates the best of Israeli food culture, while also honoring the culinary heritage of Jaffa and the property’s Turkish roots.  Here, guests are treated to the best in seasonal and local fare, while across the courtyard; The Setai Tel Aviv Bar serves handcrafted cocktails, fine wines and a traditional British high tea service. JAYA restaurant is centered on a dazzling Brazilian blue marble bar.

The Setai Tel Aviv also offers a full-service spa with seven treatment rooms, a traditional Turkish Hammam and a fully equipped gym, as well as four meeting and banquet spaces.