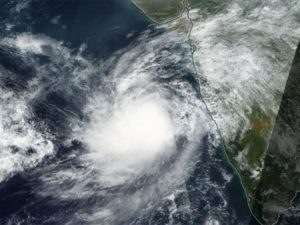 Severe tornadoes, flooding, and thunderstorms hit the southern regions of Oklahoma, Texas, and Louisiana on Wednesday and early Thursday. The weather disruption left dozens injured and at least seven people have been reported dead.

In Oklahoma and Texas area, five people were killed due to highly dangerous twisters, while one person died in a storm in Louisiana followed by others in floodwaters. Even in the region of Onalaska, located around 90 miles (144km) north of the city of Houston, 30 people were left injured and three reported dead due to a tornado. According to the National Weather Service, a large and dangerous tornado also struck Marshall County in southern Oklahoma at around 16:30.

The severe weather conditions also left significant damage to homes, businesses, and other infrastructure in the affected regions. As of Thursday afternoon, more than 100,000 homes across the U.S. south were without power. Millions of people remain in the path of possible severe weather on Thursday.

Other tornadoes were also reported throughout the evening in the region, with storms dropping golf and baseball-sized hail, according to local reports. In Louisiana, one woman was killed in a severe storm in Rapides Parish.

Robert Chaney, Texas County’s emergency management chief informed in a press statement that another body was found a quarter-mile (0.4km) away from a factory near the town of Madill. In DeSoto Parish, one man reportedly drowned after accidentally falling into floodwaters.

Trees were uprooted, power lines were downed and homes were damaged. Many people were rescued by the government in their homes. Tornadoes were also reported in Mississippi. Jayson Richardson, DeSoto Parish Sheriff said in a press brief that the city of Mansfield also faced extreme flooding.

The National Weather Service (NWS) informed in an official statement that an extremely dangerous tornado that hit the city of Onalaska and other parts of Polk and San Jacinto counties in Texas formed around 18:00 local time (23:00 GMT). It also forecasted a storm system that could cause widespread regions of heavy rains, flash flooding and severe thunderstorms across the south-eastern part of the country on Thursday.

Some parts of the South were also under tornado warnings as of Thursday morning. Texas Governor Greg Abbott said the state’s emergency management agencies are working with local officials to provide assistance to the ones affected.