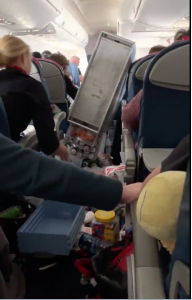 Delta Airlines flying from Santa Ana, California to Seattle, Washington encountered severe turbulence en route, leaving 5 people injured. The flight made an emergency landing in Reno in the U.S. state of Nevada at 1 pm local time.  Three of the passengers were transported to the hospital with minor injuries, from Regional Emergency Medical Services Authority (REMSA).

The turbulence flipped a food cart in the aisle.  The food and drink items were strewn on the floor. Passengers were checking on one another. According to a passenger, the plane nosedived twice.

As per Delta Airlines there were 59 passengers and 4 crew members aboard the aircraft.  The passengers would continue their journey on another aircraft coming in from Salt Lake City, Utah.

Delta is making resources available to take care of their customers and to get them to Seattle. Passengers were served pizza and soda after landing in Reno.

National Weather Service had warned earlier that a strong winter storm moving into the region could create dangerous flying conditions with extreme turbulence. A winter storm warning is in effect for the Lake Tahoe area through 11 pm local time on Thursday.