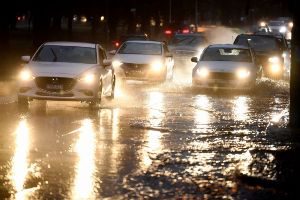 An extreme cold front and intense winds of more than 90 kmph hit New South Wales forcing the cancellation of flights and ferries. The Bureau of Meteorology detected gusts of 91 kmph at the airport this morning and more than 19-20 mm of rain overnight. Multiple flights of all major Australian airlines out of Kingsford-Smith Airport were cancelled on Tuesday morning across Qantas, Tigerair, Virgin Australia and Rex. Others were delayed by more than three hours.

Ferries between Sydney’s CBD and Manly have been cancelled after boats were smashed by dangerous swells. A blanket of snow has severed towns in the Blue Mountains from reaching Sydney.

Virgin Australia tweeted, “Wild weather in Sydney today is expected to have an impact on flights”.

Ulladulla, on the NSW South Coast, recorded gusts of up to 130 kmph about 4am, the strongest in the past decade. Massive waves more than 5m high put on spectacular sights along Sydney’s beaches as locals watched on.

The weather bureau issued warnings for rain, wind, and dangerous surf across the coast of  New South Wales and snow in numerous inland areas.

Airlines have warned travellers to check for updates before they arrive at their airport to avoid disappointment.

Flights to domestic destinations including Melbourne, Canberra, Brisbane, Gold Coast, Coffs Harbour, Tamworth, and Dubbo have all been affected.  International flights fare a little better, with some delays but fewer cancellations.

The rain conditions increased the risk of accidents on the roads.