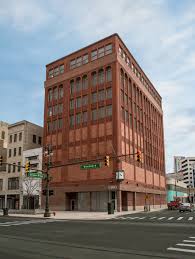 Shinola has opened the doors to its latest product involving American ingenuity – a hotel.

Located in downtown Detroit’s Central Business District, Shinola Hotel is the first hospitality concept for Shinola and has begun taking stays as of today, January 2, 2019.

As a concept by Shinola and Bedrock, a major Detroit real estate developer, the Shinola Hotel will contain 129 guest rooms with residential style units offering different guest experiences and 16,000 square feet of retail and food and beverage space. It will pair two restored historic buildings – the former T.B. Rayl Co. department store and a former Singer sewing machine store that also was home to the Singer Sewing Machine Company – with three brand new ones.

The hotel will also hold a lobby restaurant, mezzanine lounge, social “living room” and conservatory plus event space; on the outside, there is a beer hall and an activated alley buzzing with activity. Shinola partnered with fellow Michigan companies to incorporate locally-made furniture, wall coverings and furniture; even the state’s food and drink is well-represented.

For the hotel, Booms Stone Company in Southeast Michigan produced elegant stone finishes in guestrooms. Great Lakes Stainless from Traverse City crafted decorative metals that are to be featured throughout the hotel’s public spaces. As for food and drink, the hotel’s minibars will hold Michigan staples, including Traverse City’s Great Lakes Potato Chips, Shinola Cola and Vernors, a ginger ale that was invented in Detroit.

Other America-made products involve custom bathroom fixtures by Waterworks, a bathroom design company, encompassing the case back detail of Shinola watches, and Heath Ceramics’ custom-created tableware for the Living Room and in-room dining.

Of course, Shinola products will be featured at the hotel. Various rooms will have the brand’s power supply extension cord, shoe polish and leather care items, along with specifically made for the hotel goods such as a bedside clock, leather throw pillows and custom pillows.

Library Street Collection, a gallery in Detroit, will curate what’s described as a provocative mix of art that will feature works by local and international artists. In its lobby, Detroit artist Margo Wolowiec will cover four walls with floor to ceiling with custom woven panels, in creating an immersive environment of color and energy.