Could you be a Signaller? Network Rail is Recruiting 60 Across Yorkshire and the North East 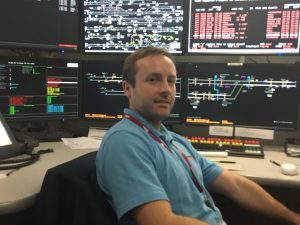 Network Rail is inviting people in Yorkshire and the North East to a recruitment event next month to find out more about careers in signalling.

Signallers make sure the railway operates safely by setting signals, controlling level crossings and allowing trains to run. Network Rail is recruiting around 60 new signallers for various roles in the Rail Operating Centre in York (ROC) and at other locations including York, Sheffield, Leeds, Hull and the North East.

Most signallers at Network Rail begin their careers out in signal boxes and then progress to the state-of-the-art York ROC, where the signalling systems for areas across Yorkshire, Lincolnshire and along the East Coast Main Line have been moved to.

John Doyle started working as a signaller 18 months ago and was based at Hammerton signal box on the York to Harrogate line. He now controls the running of the railway in the Brough area from the ROC.

He said: “Signallers oversee the safety of the railway. No train moves without our say so. If there’s an incident, we are there to step in and get the railway running again.

“I enjoy getting a buzz from the responsibility, as you get to make the decisions about a big area of the railway.”

The signaller recruitment event will take place on Saturday, 14 March at the ROC in York. Signallers, managers and members of staff will be able to offer advice, answer any questions and show people some of the operational workstations which control the signalling systems on the railway. Anyone who would like to attend will need to book a place first.

Signallers join Network Rail from a wide range of backgrounds and go through intense training which is provided as part of an accredited apprenticeship scheme. John came from an events management role and said: “You have a lot of responsibility, but Network Rail don’t put pressure on you. The training starts in a classroom and you get as long as you need until you feel comfortable.”

John has already moved up three positions since joining Network Rail and said: “There’s loads of opportunities here. If you’ve got the right attitude, the practical skills will follow. Network Rail are 100 percent behind you.”