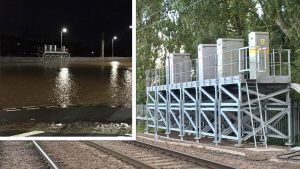 A section of the West Coast main line in Cumbria, which was wrecked by flooding for a fortnight in 2015, reopened in less than 24 hours this week thanks to lessons learned by Network Rail.

In 2015 a major storm damaged vital signalling equipment when the railway flooded at Caldew Junction just north of Carlisle.

Network Rail engineers had to carry out complicated repairs which forced closure of the busy main line to Scotland for 14 days.

In the months that followed Network Rail hatched a plan to raise the signalling equipment, which control train movements, on to 3m-high stilts.

Last Sunday, when Storm Ciara flooded Caldew again, the railway at this location fared far better than 2015 and was reopened to trains within 24 hours.

The vital signalling system remained intact on its stilts but point motors which sit beneath the track were damaged and needed replacing.

This blocked the West Coast main line in both directions on Monday until 4.30pm.

Adam Checkley, weather resilience programme manager at Network Rail, said: “While not perfect, one day of disruption is far better than 14. Small improvements like this are helping us cope better with the increasingly extreme British weather.

“With Storm Dennis forecast to hit Britain this Saturday, we’re expecting more flooding at this location and others.  River levels are high and ground is saturated following Storm Ciara. We have bolstered teams of front line engineers poised ready to clear debris and keep passengers moving safely.”

He added: “Our advice to anyone travelling this weekend is: Check before you travel at nationalrail.co.uk or with your train operator.”