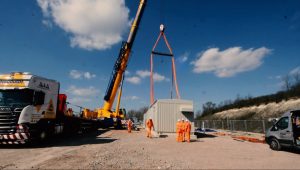 A significant milestone in the Midland Main Line Upgrade has been reached as a brand new sub-station has been installed along the route.

This is a key step in the step in the electrification of the railway from London to Kettering and Corby via Bedford. The sub-station has been installed at Low Meadow farm, north of Luton. It is the first of eight new sub-stations to be installed and will supply power to overhead line equipment.

Network Rail has released time-lapse footage of the installation.

A huge amount of work has taken place on the Midland Main Line Upgrade over the past few years. Thousands of foundation piles have been installed, as well as masts which will carry the wires. Dozens of bridges have also been reconstructed to allow for the clearances for the overhead line equipment.

“Work has taken place along the whole route, including major upgrades in Derby and Market Harborough, which is creating a more modern and reliable railway which will better meet the needs of the communities and economies our railway serves.”

As part of the project, Network Rail has also launched a major safety campaign to highlight the dangers of trespassing on electrified railway. The campaign stresses that electric wires are ‘Always On, So Always Stay Off.’ A safety film, entitled ‘18’, produced as part of the campaign, has already been viewed almost four million times.