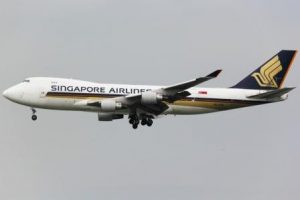 On Wednesday, April 15, Singapore Airlines released its March performance measurements and confirmed that ongoing service cancellations have affected the carrier’s financial performance. Singapore Airlines Group witnessed an overall 64.8% decline in passenger numbers. Singapore Airlines officially announced that in the fourth quarter of the financial year 2019-20, the SIA group confronted the greatest challenge in its history due to the global COVID-19 outbreak. It mentioned that the pandemic had an unprecedented impact on its business.

So far, the airline has suspended the majority of flight operations. Most flights will remain canceled and further cuts can be expected till the border closures of Singapore and destination ports are lifted. The wider Singapore Airlines Group consists of Singapore Airlines, SilkAir, and Scoot. The airline saw substantial drops in its numbers across multiple metrics. In March 2020, the Group carried 1,096,000 passengers. This shows a decline of 64.8% as compared to the 3,111,000 passengers it carried back in March 2019. Load factors dropped from 81.5% to 57.4%, a drop of 24.1 points. Even short term transit passengers have been prohibited from passing through Singapore since the end of March this year.

At the moment, only 10 aircraft are still flying across the wider Singapore Airlines Group. Scoot has grounded around 98% flights, while SilkAir and Singapore Airlines have cut down approximately 96% flights. The regional low-cost carrier, Scoot with its 51 aircraft saw its monthly year on year passenger numbers fall from 914,000 to 318,000. The decline stands at 65.2% with load factors falling down to 69.5% in March 2020 from 85.5% in March 2019. The recorded drop amounts to 16.0 points.

Irrespective of the harsh impact of the coronavirus pandemic, the future of Singapore Airlines is assured after the company arranged around USD$14.5 billion to battle through the present crisis. The majority owner, state-fund Temasek Holdings, is underwriting the sale of stock and bonds to the value of USD$10.5 billion. A further USD$3 billion is being loaned to the airline by DBS Group, Singapore’s largest bank.