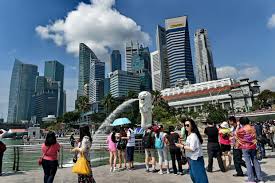 Singapore is preparing for a harder hit to tourism than initially expected as a result of corona virus outbreak that has spread to more than 100 countries, impacting global travel plans, said the Minister for Communications and Information S Iswaran.

“Now it’s really the fact that there’s a global spread of this virus and therefore we will have to reevaluate certainly the numbers,” Iswaran said in an interview.

Singapore’s tourism chief has said that tourist due to the outbreak, making it worse than the 2003 SARS pandemic.

The city-state is witnessing a loss of about 18,000 to 20,000 tourists per day and that could plunge further if the situation persists, said Keith Tan, the chief executive officer of Singapore Tourism Board.

Iswaran, who is also the Minister-in-charge of Trade Relations, refused to elaborate when asked about the scale of any second support package.

“We are prepared to do more, but it has to be a response to the situation,” Iswaran said.