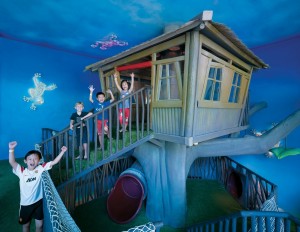 Singapore’s Shangri-La Hotel is going to satisfy the kids with $700-a-night fantasy suites, which is offering the toys and themed rooms.

The luxury hotel, Shangri-La Hotel has introduced five themed suites that are straight out of a kid’s fantasy, where the families can stay in the Castle suite, which comes with a fortress-style bed, the Tree Top suite which resembles an adventure playground or the Space suite, where youngsters can bed down in a make-believe spaceship.

There’s also the Underwater suite featuring an ocean-inspired wall, while the Safari suite has a luxury camping-style bed that’s likely to have youngsters pleading to go to bed early.

These kid rooms are located on the ninth floor of Shangri-La Hotel, Singapore’s Tower Wing, all five suites measure 72 square meters and boast a connecting tunnel between the children’s and parents’ bedrooms.

It aimed at the families made up of two adults and two children aged 12 and under, they also have more practical features such as a second, larger bathroom with a sink for washing babies and a nappy changing space.

There are other offers which include “effortless in-room check-in,” a dedicated family concierge service and access to a pantry with a sterilizer and an induction heater while a child’s menu created in consultation with nutritionists is available via room service.

The themed suites guests also get complimentary admission to Buds by Shangri-La — an interactive indoor and outdoor play space that spans 2,150 square meters.

The kid rooms opened in January. It holds a number of themed activity spaces including a music studio for budding musicians, a cooking classroom for both children and parents, a party room for special celebrations and a specially designed Toddler Zone for kids under four.

Singapore’s Shangri-La Hotel also has a free-form outdoor swimming pool with a wading area and jet fountain, as well as gardens spanning 40,500 square meters. If the themed rooms aren’t quite to your taste, there are 19 deluxe family rooms available which hold built-in beds to provide guests with more space.