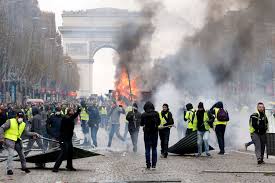 In wake of ongoing violent protests in Paris and across the country, Turkish Foreign Ministry and The Ministry of Foreign Affairs (MFA) of Singapore have issued a travel advisory respectively for citizens traveling to France.

Citizens who live in France and will travel to the European country are advised to avoid areas of demonstrations, and not to be in places which are not safe.

Turkish citizens are advised to exercise caution while traveling through highways and intercity roads, owing to recent closure of roads, barricades, and blockades.

For the last two weeks thousands of ‘yellow vest’ protesters have gathered in Paris and several other cities to protest against the controversial fuel tax imposed by French President Emmanuel Macron. Within a year, fuel prices have increased by more than 20 per cent.

According to a survey, 84 per cent of French people mostly from the middle-income group support the ‘yellow vests’.

Taking reference to the figures from France’s Ministry of the Interior, Singapore MFA said that about 282,000 people took part in marches and demonstrations on Nov 17, while 106,000 participated in such activities on Nov 24.

Singapore MFA is of the opinion that more protesters are expected to take to the streets on the weekend of Dec 1 and Dec 2, 2018.  Traffic disruptions, violence and other disturbances cannot be ruled out.

Singaporeans who are either travelling to or already in France are advised to avoid large gatherings and demonstrations.

The demonstrations may disrupt public transport; therefore additional travel time must be taken into account.

Citizens from Turkey and Singapore are advised to monitor local media for developments and follow the instructions of the local authorities.