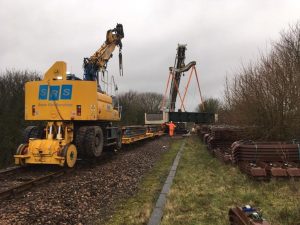 Network Rail has successfully completed improvements on the Heart of Wessex line, including the renewal of a bridge at Yetminster and strengthening of a tunnel near Dorchester.

During a six-day line closure on the Weymouth to Bristol line between February 15 and 21, Network Rail engineers and contractors from Osborne replaced the deck of a 129-year-old bridge that crosses the River Wriggle.

Despite 70mph winds and torrential rain from Storm Dennis across the first two days of the project on Saturday 15 and Sunday 16 February, work was completed on time during the evening of Friday 21.

The first passenger train following the line’s re-opening, a Great Western Railway (GWR) service from Weymouth to Bristol Temple Meads, passed at 7:16am on Saturday 22 February.

17 miles down the line in Dorchester, engineers also took advantage of the six-day closure from Weymouth to Yeovil Pen Mill by completing major maintenance at Grimstone tunnel.

The 600 metre long tunnel between Dorchester West and Maiden Newton stations, which dates back to 1857, was reinforced using concrete over-spraying, covering a steel mesh.

Network Rail engineers and contractors from AmcoGiffen sprayed concrete over a distance of 100 metres then followed up with brickwork repairs in the remainder of the tunnel.

“I know the teams in Yetminster and Dorchester have worked tirelessly for months to plan this work, and they then faced the challenges of Storm Dennis head-on.

“My thanks go to everyone involved in the project, which demonstrates the importance of working with our partners to deliver a more reliable railway that will give better journeys to our passengers.

“I would also like to thank passengers and residents living close to the railway for their patience while we have been working.”

“The Heart of Wessex line is an important route for customers travelling to or from Weymouth.

“This line upgrade programme will help ensure the ongoing reliability and performance of train services along that section of the railway.”

There are two further weekends of improvements planned in which engineers will follow up on their work at Yetminster river bridge (Saturday 29 February – Sunday 1 March), before renewing track at Chetnole and between Dorchester West and Weymouth (Saturday 28 and Sunday 29 March).