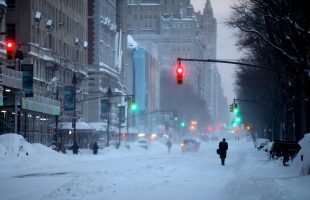 A wintry mix is supposed to move inland and may transform into snow over cities like New York, Albany, Burlington, Vermont and Chinchar. The conditions may last till Thursday. As per the report of National Weather Service station in Burlington, roads are expected to be covered with snow on Monday afternoon and Tuesday morning. Commuters have been advised to slow down and use caution while travelling.

A low-pressure system off the Carolinas has created the storm that tracked up the East Coast. The storm is likely to interact with a trough over the Midwest and send gusts and wintry weather to the Northeast areas. Last year, the country witnessed unexpected heavy storm that caused snow across much of the Northeast.

Hazardous weather condition alert has been issued for the Pioneer Valley with potential for freezing rain tonight and early tomorrow morning.

There is also a slight chance of freezing rain before midnight precipitation stops until morning.

Besides, freezing rain is also likely to occur between 8 and 9 am Monday, before changing over to all rain after 9 am.

Overnight lows will be in the low to mid-30s, rising into the low 40s Monday morning.