Snow to sweep U.K. as temperatures plunge to -6 degree Celsius 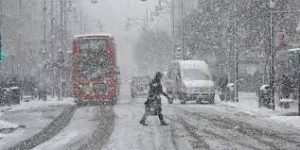 Severe flood warnings have been issued for the U.K. after snow and rain fell across Scotland, Northern Ireland and northern England, with parts of the country still recovering from the damage inflicted by Storm Ciara and Storm Dennis last weekend. The temperature of the country are also set to drop to as low as -6 degree Celsius while 10cm of snow is expected for parts of the Britain.

The commuters have been advised to expect traffic disruption as the new working week gets under way. A huge flood warning – meaning an imminent “danger to life” – remains in place for the River Severn in Shrewsbury, with a further 188 flood alerts issued for England by the Environment Agency (EA).

The EA said in a statement that heavy rainfalls had caused the Severn’s levels to rise and “flooding of property is expected to continue”. Some parts of the West Midlands and Yorkshire could also be subject to rising floodwaters, the EA added, while yellow warnings for rain and snow have been issued for Northern Ireland and northern England.

England has already received more than 141 per cent of its average rainfall for February, with some regions experiencing an entire month’s worth in a 24-hour period.

Caroline Douglass, director of incident management at the EA said that further spells of rain across England could cause further flooding, particularly in Yorkshire and the Midlands. The river levels remain high and ongoing river flooding remains probable for the River Severn next week as it responds to heavy rainfall.

With the effects of climate change, we need to prepare for more frequent periods of extreme weather like this. People need to be aware of their flood risk, sign up to flood warnings, make a flood plan and not to drive or walk through flood water. In Scotland, a yellow weather warning has been issued for snow across all but the most northern areas and Aberdeen until 10pm on Monday.

The Met Office said that here, two to five centimetres of snow is likely above 100 to 200 metres whilst above 300 metres 10 to 20cm snow may build up. The temperatures are also due to fluctuate across the UK on Monday, reaching 11-12C in the south of England and as low as -6C in northern Scotland. For those parts of the country affected by the cold temperatures, the Met Office has warned commuters to “keep an eye out”.

Met Office forecaster Marco Petagna said that at the moment they are seeing ice and frost overnight most nights, and there are going to be a lot of icy patches around this morning. The Scottish Environmental Protection Agency said three flood warnings were in force on Monday morning with four further flood alerts. And in Wales, there were nine flood warnings in force and 19 alerts.

While the extreme weather should settle down over Tuesday and Wednesday – accompanied by a notable dip in temperatures – the Met Office said further heavy rain is expected on Friday.

This raises the prospect of another weekend of floods, with Prime Minister Boris Johnson still under pressure to visit the U.K.’s worst-affected communities after neglecting to do so over the course of the past month.