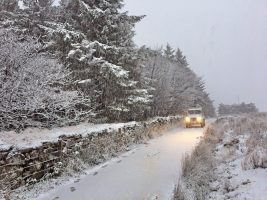 Snow warning has been issued for England, Wales and Scotland this morning as Brits shiver in -4 degree Celsius.

Snow hit South Wales and south-west England yesterday. The Met office had issued a snow warning for Wednesday and Thursday. The warning is in force until 10 am on Thursday.

The temperature reached -4 degree Celsius in parts of Scotland overnight when an ice weather warning was in force across the country. The ice alert started at 7 PM on Wednesday and is supposed to end at 10 am today.

As per the predictions, a mix of rain and sleet is supposed to happen at lower levels but snow is supposed to fall at elevations above 200 metre, with some snow setting on roads above 250-300 metre. A few cms are expected on the highest routes.

The Met office’s warning for Scotland on Thursday says that scattered showers will hit a good portion of the east coast of Scotland this evening and overnight. Scotland will experience freezing temperatures ultimately.

The Met office assumptions are that snowfall will be heavy at times and this will lead to risky icy surfaces. Showers are expected to be wintry above 200 metres away from the coast across Aberdeenshire and Moray, with 1-2 cm of snow possible.

The weather experts have also issued two rain warnings for the UK today, first in north-east England and second in south Wales and south-east, south-west and centre of England, which is supposed to be larger in nature.

60 mm of rain is expected in some places and flooding is supposed to pose a threat to life.

Met office alert has also been issued for few parts of Midlands and north-east England on Friday.