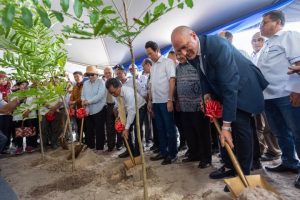 Club Med and the owning company, Golden Sands Beach Resort City Sdn Bhd (GSBRC), a Sabah based company, held a celebratory event on the morning of 25 November 2019, to plant a rooted foundation for the resort with their first ceremonial tree. The Club Med team was accompanied by government officials from Sabah, including YAB Datuk Seri Panglima Haji Mohd. Shafie bin Haji Apdal,Chief Minister of Sabah, a key figure in the development of this project, as well as over 400 guests from the region.

The construction of this premium resort (4-Trident) with a Club Med Exclusive Collection Space (5-Trident) will begin in Q2 2020 and is expected to welcome its first guests in late 2022.

This resort marks a significant milestone for Club Med, as the brand celebrates its 70th anniversary next year. Having opened its first resort in Asia Pacific in Cherating 39 years ago, which ignited decades of growth across the region, Club Med is very pleased to extend its commitment as a partner to Malaysian Tourism, in a destination such as Sabah which is seeing increased airlift and interest from travellers across the globe.

Following the success of Club Med Cherating Beach, establishing the new location in Sabah is a strategic move for Club Med, as the state has excellent connectivity with other Asian countries, receiving 3.9 million visitors in 2018 alone. With the abundance of flora and fauna species, opportunities to enhance the unrivalled beauty in Sabah’s biodiversity and good weather all-year around, there is massive growth potential for Club Med Borneo Kota Kinabalu to be recognized as the top upscale resort at the holiday destination.

Built on 41 acres of land flanked by tropical rainforests, fronted by kilometres of pristine beach with picture-perfect white sand, and located next to a mangrove reserve, Club Med Borneo Kota Kinabalu will be the brand’s first large-scale sustainably-built beach resort in Asia Pacific certified by the Building Research Establishment Environmental Assessment Method (BREEAM). The focus on eco-sustainability shared by both Club Med and GSBRC looks to ensure that the location’s natural beauty is preserved while increasing their positive impact to the community.

Club Med Borneo Kota Kinabalu will create approximately 400 job opportunities for the community of Kuala Penyu, contributing to the local economy while simultaneously showcasing Sabah’s beautiful surroundings by unveiling this hidden gem to the world.