Soneva Resorts to Unveil New Private Seaplane in the Maldives 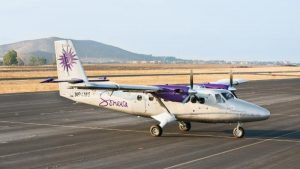 Soneva, the leading luxury resort operator, has announced that it will soon be unveiling its new 10-seater Twin Otter seaplane in the Maldives. The DHC-6 Twin Otter, which normally seats 19, has been completely overhauled by the IKHANA Group in Canada, custom-painted with Soneva’s branding in a rich purple on the exterior, and outfitted with new chrome and purple leather interiors. The new plane, which will be in operation by mid-December, will transport Soneva guests roundtrip from Malé International Airport to Soneva Fushi in Baa Atoll and Soneva Jani in the Noonu Atoll of the Maldives.

The aircraft has been customized to meet Soneva’s luxury brand standards, with interior panels designed to provide a smoother, cleaner look than the typical commuter aircraft interior. The seats have been reupholstered using Elmosoft leather in Soneva purple with a floor covering that mimics slate. The aircraft has 10 VIP seats (eight front-facing and two rear-facing), with two additional fold-down seats and two pilot seats. There are also signature Soneva design touches on-board, such as handcrafted lighting.

The interior of the Twin Otter planes.

“This is a very welcome addition to our operations in the Maldives, as it will help to even further elevate the guest experience,” said Sonu Shivdasani, CEO and Joint Creative Director. “The plane will be exclusively reserved for Soneva guests, which means that we can be quite flexible with regards to the operating schedule and luggage limits, which we hope will be good news for our guests. We’ve been working on the design of this plane for a long time to ensure the specifications and finishes are of the highest quality, so we’re delighted to soon begin offering this transfer option to our guests.”

Twin Otter planes are the best performing aircraft for operation in the Maldives due to their short take-off and landing (STOL) abilities, which makes them ideal float planes as they lift off the water faster. DHC-6 Twin Otters have an average range of 886 miles, a top speed of 184 miles per hour, a cruise speed of 173 miles per hour and a wingspan of 66 feet.

This model of aircraft’s fixed tricycle undercarriage, exceptional safety record, twin turboprop engines and high climb rate have made it a successful commuter passenger airliner as well as a cargo and medevac aircraft. The Twin Otter has been popular with commercial skydiving operations, and is used by the United States Army Parachute Team and the United States Air Force’s 98th Flying Training Squadron.

Soneva’s plane is currently en route from Canada across Greenland to Iceland in one hop, then through Europe and the Middle East, before landing in the Maldives.The cost of the roundtrip seaplane transfer will be USD$1,100 return from Malé to Soneva Fushi or Soneva Jani.