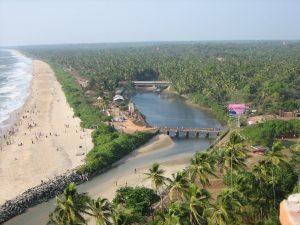 The district saw a huge increase in the inflow of tourists in 2018 compared with the previous year.

According to official figures from the tourism sector, over 72,000 more tourists, mostly domestic tourists, visited tourism destinations in the district in 2018 than the total number in 2017.

The opening of the Kannur International Airport is expected to further accelerate the growth of the tourism sector in the district. Though there was a slight decrease in the number of foreign tourists after the August floods, the last year saw overall growth in the tourism sector here.

The increase in tourists is due to the renovation of tourism destinations and enhancement of tourism facilities as part of initiatives to tap the tourism potential created by the new airport here. The Tourism Department has set up facilities on the Payyambalam beach here for the tourists. The facilities include beach gym, bamboo café, etc.

A major tourism spot that attracts tourists here is Palakkayamthattu, which is termed as the Ooty of Malabar. The facilities provided there include those who like adventure tourism.