South India’s Vizag will soon be on cruise tourism map 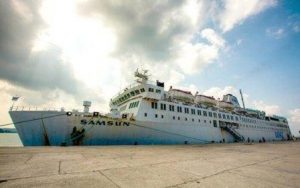 With the Union Ministry of Shipping asking the major ports in India to play a key role in developing tourism infrastructure, the Visakhapatnam Port Trust is firm on putting the city on the world cruise tourism map.

The Central India has cleared the proposal to develop an international cruise terminal near the channel berth here, for which the Union Ministry of Tourism has agreed to release a lion’s share of the amount required for the project. The project cost is estimated at ₹80 crore.

The new cruise terminal will come up with 300 metre overall length to facilitate docking of cruise liners carrying 1,500 passengers with executive lounge and other facilities.
VPT Chairman M.T. Krishna Babu said that the designs for the project are already prepared and once final clearance is received, the work on the terminal will start, the officials say. “Once we get the approvals, the construction will be completed in 18 months.
The cruise tourism is also developed in a big way in Mumbai, Mangalore, Chennai and Kochi to welcome high-end tourists. With several Buddhist heritage sites all along the coast in North Andhra, the sun-kissed beaches and lush-green forests of the Eastern Ghats will make Visakhapatnam an ideal destination, he said.

The anchoring of first-ever international cruise liner, Sliver Discoverer, at the Visakhapatnam Port on January 24 has come as a shot in the arm to promote the tourism potential of the city to about 100 tourists who came from the U.S., the Europe and other regions. The luxury cruise liner Sliver Discoverer operated by Silver Sea Cruises was brought here as part of Asian cruise in India, Sri Lanka, Bangladesh and Myanmar. The Indian itinerary of the ship included Chennai, Visakhapatnam, Paradeep, Sundarbans and Maheskhali Island.