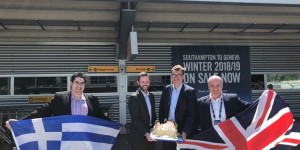 Southampton Airport has today launched its first flight to Skiathos with its new airline, FlyLolo. This is the first time Southampton Airport provides a direct route to Greece, with the airline operating every Tuesday till 2 October 2018.

To truly get into the spirit of Skiathos, a tribute band called ABBA’s Angels surprised everyone in Departures by performing songs from the Hollywood’s most famous musical, Mamma Mia! All passengers have joined the celebrations and enjoyed the taste of the Skiathos cake, while cheering to the beloved ABBA’s tracks.

Councillor Spiros Vassiliou was one of the passengers on this first flight to Skiathos. He commented: “I am delighted that the first ever direct flight to Greece is being launched from our fantastic local Southampton Airport! This is a connection that I and many others have long hoped for and it has only been made possible because of determination and commitment of FlyLolo and Southampton Airport.”

He added: “I would like to thank everyone involved for making this connection a reality and am looking forward to even more Greek destinations starting in 2019. I am thrilled that people in this area can now easily enjoy the beauty, history and hospitality that Greece has to offer.”
Neil Garwood, the Managing Director for Southampton Airport, said: “We are really excited to finally launch the flight to Skiathos. We are committed to providing more exciting destinations to our customers, and this is the first time we’ve opened up a getaway to the Eastern Mediterranean. We are looking forward to continue our relationship with FlyLolo.”
Paul Dendle, the CEO of FlyLolo, has joined the celebrations on the day and he said: “We’re excited that this is the first ever flight from Southampton to Greece, we see this as an important moment in the development of Southampton Airport which provides a stress-free alternative to the London airports. It’s a first step for our expansion plans for 14 destinations next year to the Eastern Mediterranean.”