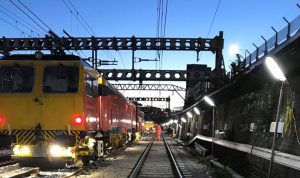 Southend rail passengers are able to catch their usual train from Monday 16 March after a speed restriction at Maryland, near Stratford, was lifted.

Recognising the severe impact the disruption was having on passengers, Network Rail reworked the phasing of its track upgrade programme so that trains can travel through Maryland at a higher speed and run as usual in the morning and evening peaks.

The speed restriction was put in place as part of a critical programme to replace track on the busy lines out of London Liverpool Street. Once completed this will reduce the number of delays and cancellations owing to track faults. The speed restriction meant that a small number of services were cancelled in the morning and evening peaks. A speed restriction is imposed as a safety precaution after track is replaced, while checks and follow up work is carried out.

Ellie Burrows, Network Rail’s route director for Anglia, said: “I’m sorry that passengers on the Southend line have bared the brunt of this speed restriction and that coupled with the closures for the weekend works to upgrade the overhead wires, they are dealing with a lot of disruption.

“For that reason, we’ve rephased the works so that we could safely lift the speed restriction two weeks earlier than planned so a full service can run. I have begun a full review into this to minimise the impact of our work in the future.”

Jamie Burles, Greater Anglia managing director, said: “We are very pleased that Network Rail has been able to lift the speed restriction at Maryland earlier than expected – which is good news for our customers. We are very sorry for the inconvenience this incident caused to our customers in the last two weeks, especially those on the Southend line, where some rush-hour services were cancelled.”

Work to replace the track at Maryland will continue until 30 March, with follow-up works to take place on the 18-19 April. This work will reduce the number of delays and cancellations owing to track faults.

Network Rail is also replacing the overhead wires on the line between Shenfield and Southend Victoria as part of a £46m investment, which will mean fewer delays and cancellations, especially when the weather is hot. This will finish at the end of the month with follow-up works on the 18-19 April.