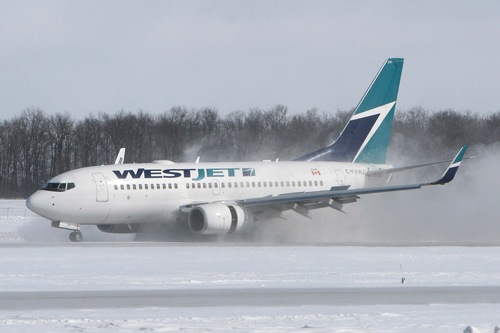 Luv is in the air! Southwest Airlines announced today that it is taking the next step in its marriage with subsidiary, AirTran Airways. Customers are now able to purchase a growing number of itineraries between the Southwest and AirTran networks for travel on a single itinerary. Soon, Customers will be able to book flights to any of the airlines’ combined 97 destinations, including international, in one transaction.

“Connecting the networks is a priority in 2013 and a major milestone as we work to combine our two Companies,” said Bob Jordan, Chief Commercial Officer at Southwest Airlines and President of AirTran. “With a connected network, we can offer Customers more itineraries, more destinations, more low fares, and a taste of what’s to come once the integration is complete.”

Southwest Airlines and AirTran Airways took the first step in connecting their networks on Jan. 26, 2013, by offering a small number of shared itineraries in five markets. The initial phase was successful, and the airlines are prepared to launch in 39 cities on Feb. 25, 2013. The airline is on pace to fully connect the networks in April.

By connecting the Southwest and AirTran networks, Customers may:

— Use all Southwest channels to book an AirTran-only domestic itinerary.

— Add an international AirTran segment to a Southwest itinerary within a
single reservation, through a Customer-friendly transfer of the
transaction to AirTran channels for booking, purchase, and ticketing by
AirTran.

— Earn currency in either loyalty program no matter which carrier they fly.
(The currency a Customer earns is determined by the carrier from which
they buy their ticket, even if flying on a shared itinerary.)
As is standard with industry “code share” arrangements, the Marketing Carrier’s rules and policies apply to reservations and ticketing. The Operating Carrier’s procedures apply to boarding, seating, and the onboard experience. Southwest is making one exception: any itinerary with a Southwest segment or that is purchased through a Southwest point-of-sale channel will not have bag fees for the first or second checked bag (weight and size restrictions apply). Customers can find specific details and answers to frequently asked questions by visiting www.southwest.com.

Customers will continue to earn and redeem currency through the frequent flyer loyalty programs of their Marketing Carrier, regardless of the Operating Carrier they travel on. Customers should be enrolled in both Southwest Airlines Rapid Rewards and AirTran Airways A+ Rewards programs in order to earn currency from whichever airline they purchase a ticket. Loyalty Members also have the ability to transfer their currency between the two loyalty programs. For more information about transferring loyalty currency, visit www.rewardsfarther.com.

The process of a full integration of the AirTran Airways 737 fleet into the Southwest Airlines fleet (i.e. paint scheme and interior configuration) and transition to a single ticketing system is a large and complex process that is expected to be completed by the end of 2014. Southwest Airlines realized $142 million of net, annualized, pre-tax synergies during 2012, and expects to achieve $400 million in 2013 (excluding acquisition and integration expenses).