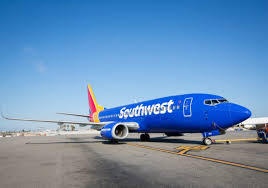 Terming the incident as “a poor attempt at humour” by a pilot using “selfie video” in a plane bathroom on a previous flight, the union representing Southwest Airlines pilots issued a statement saying the allegations of a camera in a plane bathroom “completely false”.

The attorney representing the flight attendant who has sued the airline, alleging retaliation for having reported the incident, called the response “internally inconsistent”. He said it supports that the plaintiff “was convincingly led to believe the video was being live streamed”.

As reported earlier the airline and two of its pilots, Capt. Terry Graham and Ryan Russell, face a civil lawsuit filed by flight attendant Renee Steinaker.

Steinaker alleges that on Feb. 27, 2017, on a flight from Pittsburgh to Phoenix, she was called into the cockpit so Graham could use the lavatory. Southwest Airlines policy requires two crew members in the cockpit at all times.

The lawsuit claims that when Steinaker entered the cockpit, she saw video on an iPad that appeared to show Graham in the restroom. She took a photo of the iPad on her cellphone and reported the incident to Southwest management when the plane landed in Phoenix.

The suit further claims that after landing, the pilots immediately exited the aircraft with Graham leaving “a loaded firearm unattended in the cockpit, a violation of FAA regulations”.

Steinaker and her husband, David, who also is a Southwest flight attendant and a party to the suit, state in the lawsuit that they faced retaliation for reporting the incident.

In a statement on the Southwest Airlines Pilots Association website, the union stated:

“Southwest Airlines has never placed cameras and never videoed anyone in any lavatory, and the Pilots on Flight 1088 did not video anyone. The incident, which occurred over two years ago, was a poor attempt at humour where the pilot took a selfie video from the chest up, fully clothed, in the lavatory of a completely different airplane months before Flight 1088 and then replayed the exact same selfie video on his iPad when Ms. Steinaker came into the cockpit.”

It further states that an investigation by Southwest interviewed all crew members and that the flight attendants union, the Transport Workers Union of America, was aware of the outcome. The statement said the investigation did not corroborate Steinaker’s claims, and the pilots deny violating any federal regulations.