Southwest to start flights costing $29 between Hawaiian islands in January 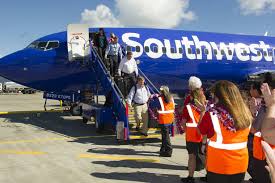 Southwest announced it would begin offering flights from Hilo as early as next year, a local newspaper reported Friday.

Two different flights are expected to fly four times daily in each direction beginning Jan. 19, 2020; from Hilo on Hawaii Island to Honolulu and from Lihue on Kauai to Honolulu, airline officials said.

There is a “good opportunity here for us, and we believe that we’ve got a phenomenal offering for the people of Hilo, whether they’re flying just to Honolulu or whether they want to connect on to the 90-plus destinations that we have on the mainland as well,” said Steven Swan, Southwest strategic planning director.

The airline did not say when flights travelling to and from the U.S. mainland to Hilo International Airport would begin, officials said.

The Big Island community has had a positive outlook toward the change.

Southwest is also offering a nonstop once-a-day flight between Kona on Hawaii Island and Kahului on Maui, officials said.

Dallas-based Southwest launched its inter-island service in March and has since offered more than 15 different flights between the islands.