Space tourism – the next level of tourism 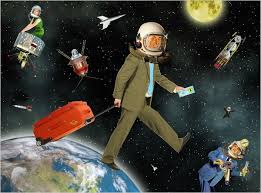 Space tourism is indeed the future of travel. What was once accessible only to scientists and astronauts is an experience open to anyone. However, the tickets are expensive — $4,950. The future is not so distant when space travel will be a more standard part of human existence. Only 560 people have journeyed on to space, but the rise of commercial space tourism will, someday soon, radically increase that number.

Elon Musk — whom the BBC has called “both bonkers and brilliant” — sincerely aims to build a colony on Mars, and his company, SpaceX, is planning to take two tourists on a trip around the moon this year itself. Jeffrey P. Bezos envisions millions of people going about their daily business in space and has founded a company, Blue Origin, to make it happen. Richard Branson’s commercial spaceflight company, Virgin Galactic, has declared that it has a goal of “democratizing access to space.”

A ride on Virgin Galactic’s spacecraft will cost $250,000. Despite that massive cost, roughly 700 people, from 50 countries, have signed up — even though the company doesn’t have a fixed launch date. Already Virgin Galactic has enlisted more people than have travelled to space in all of human history.