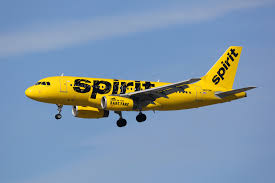 The announcement comes on the very same day Spirit begins flights from Orlando to the country of Colombia, with nonstop service to Bogotá, Medellín, and Cartagena. The latest announcement will make a total of 16 new international and domestic routes added from Orlando since September for Spirit. This expansion is the largest in the airline’s history.

Before the close of 2018, Orlando will also become home to a new Spirit Airlines crew base, set to begin operating December 1. The new base will bring more than 100 Flight Attendants and Pilots to Spirit’s Orlando team by the end of 2018, with hundreds of more crew jobs expected by spring 2019.

“We’re excited to be back in Orlando announcing even more destinations,” said Bob Fornaro, Spirit Airlines’ Chief Executive Officer. “The new routes to Colombia and upcoming service to Jamaica and Denver, will cap off our largest-ever expansion, and we’ve seen a wonderful response from both our Guests and Spirit team members. The future is bright in Orlando.”

Spirit will now offer the Orlando area nonstop service to 39 destinations with up to 50 daily flights across the U.S., Caribbean and Latin America.