Spomenka Saraga – Talks about promoting tourism of Croatia through films! 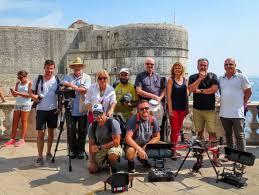 Of late, tourism arrivals from South Korea have immensely risen in Croatia, from just 16,000 to over 400,000. In contrast to utilizing this being part of a coordinated official strategy, the main factor was the popularity of numerous Korean reality TV shows. Spomenka Saraga is the director of her own production company known as Balduči Film. For her tourism films, she has grabbed many awards and she is the director of the Zagreb Tourfilm Festival, which is the international festival of tourism film that is held in Zagreb.

My love for films happened from the place I was born. I was born across the road from the legendary Jadran Film production company. From early childhood, I have seen actors and saw them on TV later on. So, in a way they were like my neighbors. At that time Jadran Film produced many American films. It was of course Yugoslavia back then, and when the actors went to buy some things, many people couldn’t recognize them. Back then, people lived relaxed lives and when in those costumes they strolled the town it looked quite exciting!

A good promotional film has to demonstrate a location in its most natural way. The film should have a target to which public is intended. While working with a tourist board, I always question them what is the target age of their tourists. Are those older people, couples, families, young people and what do you want to show tourists? At times, you can cover the whole age group. But it depends if the attraction and location can cover it, like Rijeka.