Home » Sri Lanka promotes itself as a safari destination

Sri Lanka promotes itself as a safari destination 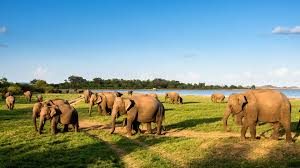 In a bid to promote Sri Lanka as a safari destination, the Sri Lanka’s Tourism Ministry has launched a safari park which includes Bengal Tigers in the southern city of Hambantota.

Minister of Tourism Development, Wildlife and Christian Religious Affairs John Amaratunga opened the Safari Park. The first zone to be opened in the Safari Park will be a  9-acre Bengal Tiger enclosure.

Currently there are six Bengal Tigers in the enclosure of which three are male.

Hemantha Samarasekara, additional director of the Safari Park in Hambantota said that another male Bangal Tiger will be transported to the park from the National Zoological Gardens in the capital of Colombo.

The enclosure has a16-foot-high wall and chain-like fence  as a security measure and three electric fences are connected to the chain-like wall.

There are artificial caves,pond for bathing and a reservoir within the enclosure.An estimated cost of 893,000 U.S. dollars  went in the building of the Safari Park.

Along with the Bengal Tigers enclosure, a 4-acre Herbivore Zone was also opened which includes deer, hog deer, barking deer, mouse deer, tortoise, ducks, emu, rabbits and hares. It will also have a pond, shelters and sprinkles for the animals.

Sri Lanka’s 26 national parks cover an area of 5,734 square km  which is protected by  the Department of Wildlife Conservation..