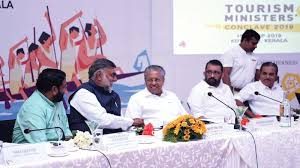 State Tourism Ministers met in the capital of Kerala on Monday and demanded the reduction, simplification and rationalization of various taxes and levies, including the Goods and Services Tax (GST), in the tourism and travel industry so that more tourists can drop in amid global competition.

At the end of meeting, Karnataka Tourism Minister CT Ravi said that decrease in GST on hotel rooms is necessary to attract more tourists.

The resolution said, “The Tourism Ministers’ conclave 2019 at Kovalam, Kerala, notes with concern that the GST Council of India has imposed 28 per cent GST on hotel room tariff over Rs 7,500 and 18 per cent tax on rooms with tariffs between Rs 2,500 and Rs 7,500. This tax rate is high compared with other countries.”

“We express concern over the high airfares during peak season and festival periods, which are forcing holiday-makers to opt for economical destinations. Besides, unexpected closure of certain airlines has led to increased airfares, while minimal air connectivity with 2-tier and 3-tier cities has only compounded the problem,” it added.

The meeting also expressed concern over the high and wide-ranging inter-state tourist vehicle taxes and called for their rationalization across all the states to making sure that travel experiences are flawless.