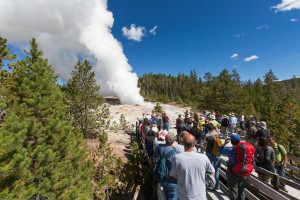 Steamboat Geyser in Yellowstone National Park has erupted at around 6.30am local time on Friday morning.

The eruption is the latest event in a rare period of activity at the geyser this year, following similar water discharges on March 15 and April 19 this year. Before this year, Steamboat Geyser had not erupted since September 2014.

The US Geological Survey said all events so far in 2018 had been smaller than recent major activity observed in 2013 and 2014.

Steamboat Geyser is located in the Norris Geyser Basin, can shoot a column of water up to 115 metres (380 feet) into the air, making it the world’s tallest active geyser.

The scientists have only ever recorded more powerful eruptions at the Waimangu Geyser in New Zealand, which has now been extinct for more than a century.

The geyser is around three times taller than Old Faithful, Yellowstone’s most famous geyser known for erupting at intervals of between 45 and 125 minutes.

The extensive geothermal activity at the park is caused by a magma chamber more than 50 miles (80km) long and 12 miles (20km) wide beneath the earth’s surface.

The event is thought to have been 2,500 times larger than the Mount St Helens eruption in 1980, the most recent major volcanic activity in the mainland US.