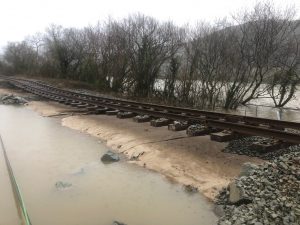 Network Rail engineers inspecting the line today have identified several sites where the ballast supporting the track has been washed away by floodwater. The storm has also damaged fencing and level crossings at several locations.

Further assessments will be carried out once the floodwater has receded, but early indications suggest that the damage is not as extensive as that caused by Storm Gareth in March last year, when the line was closed for four months.

While the line remains closed, Transport for Wales will continue to operate a rail replacement bus service to keep passengers moving and passengers are urged to check before they travel.

“Firstly, we would like to apologise to passengers and the local community affected by this closure. The Conwy Valley Line is a social and economic lifeline and this latest setback is particularly frustrating given this line has been hit so hard by extreme weather over recent years.

“Storm Ciara caused significant disruption to transport networks across the country and unfortunately the damage caused to this part of the line was significant. We simply can’t commit to a timescale for the completion of this work until the floodwater has receded and we’ve completed our assessments, but we will work tirelessly reopen this line as soon as possible.”