Home » Storm, rain, snow may cause travel disruptions in midwestern and northeastern U.S. in early week

Storm, rain, snow may cause travel disruptions in midwestern and northeastern U.S. in early week 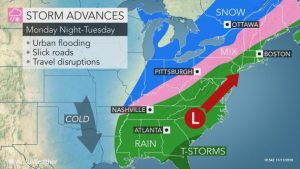 The storm that is pushing snow into Oklahoma and northern Texas into Monday will cause snow across the lower Midwest states and into the interior Northeast. The I-95 cities will again get drenched.

It is projected that the snow will sweep from St. Louis to Detroit, Cleveland and Buffalo Monday through Monday night.

According to AccuWeather Meteorologist Brian Thompson there will be enough  snowfall amounts to cause some travel problems. Some areas can receive up to two inches of snow.

The snow may initially melt away on sidewalks and roads, however the roads will remain slippery. The snow might fall late in the day and night leading to drop in the temperatures.

The flight delays are expected.

The timing of the snow could lead to slippery morning commute around Detroit and Buffalo. The interior Northeast is anticipated to see the return of snow Monday night through Tuesday.

The most persistent snow and travel hazards await northern Maine and neighboring parts of Canada (including Quebec City), where 4-8 inches can fall.

The track of the storm is expected to bring another round of soaking rain from Richmond, Virginia, to Philadelphia, New York City and Boston Monday night into Tuesday.

Poor drainage may cause flooding. The downpours will reduce visibility for motorists and cause slippery sidewalks.

Passengers might face flight delays throughout the I-95 corridor in the Northeast on Tuesday due to the rain and/or low-hanging clouds.

Lake-effect snow showers and squalls will re-develop from west to east downwind of the Great Lakes Monday night into Wednesday.