Street of California shut down after 40,000 bees swarm from Howard Johnson Inn 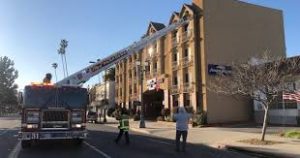 A swarm of as many as 40,000 Africanised bees sent several people to hospital and closed a street in California, after swarming from the eaves of a Howard Johnson Inn. The police and firefighters were called to the scene after a report about a bee sting on a boulevard in Pasadena on Wednesday evening. Two firefighters, two police officers and one civilian ended up at hospital after being stung.

Dave Williams of the Los Angeles County Beekeepers Association told that something set them off, some activity, noise, vibration … it’s hard to tell what. They have firefighters who have been working here for many, many years, and they said this is by far the most bees they have seen at one location, a Pasadena fire department spokeswoman, Lisa Derderian, told.

Africanized bees are descended from a cross-breed between African and European bees that was introduced in South America in the 1950s but which escaped and proliferated, breeding with local species. Due to their habit of aggressively defending their nests, the insects have acquired an familiar nickname: killer bees.

In Pasadena, the police and firefighters first tried to calm the bees with smoke, then used fire extinguishing foam to kill the bees after they failed to calm down. They don’t like to kill bees, they are  beekeepers, Williams told. But in a situation like this, where the public safety is of concern, they have to take care of the public.