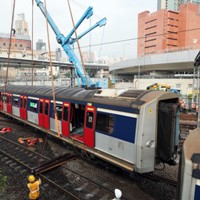 The train services disrupted as the suspected explosives found off MTR tracks between Kowloon Tong and Tai Wai stations in Hong Kong.

The police have found suspected explosives off the tracks between Kowloon Tong and Tai Wai MTR stations, prompting a partial suspension of the train services.

The bomb disposal officers investigating the case said an object looking like a shoe box was found near Tai Wai MTR station in Sha Tin soon after 10.30am on Thursday.

The MTR Corporation announced at around 12.30pm that services on the East Rail Line linking Hung Hom in Kowloon with the border district of Sheung Shui were disrupted. The free shuttle buses have been arranged for passengers commuting between Kowloon Tong and Tai Wai stations.

The Lo Wu and Lok Ma Chau MTR stations on Hong Kong’s border with mainland China have already been temporarily closed due to the coronavirus outbreak.   This is the fourth time in about a month that suspected bombs were found on an MTR rail line.