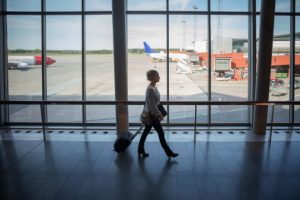 In February, nearly 2,790,000 passengers flew to or from Swedavia’s ten airports, a decrease of almost four per cent compared to the same month last year. At both Stockholm Arlanda Airport and Göteborg Landvetter Airport, air travel decreased three per cent, while air travel increased at two of the regional airports.

During February, 1,357,000 international passengers flew to or from Stockholm Arlanda Airport, a two per cent decrease compared to the same month last year. The number of domestic passengers decreased four per cent during the month to almost 399,000 passengers.

Swedavia has an ambitious sustainability work since many years. All ten Swedavia airports will produce zero fossil carbon dioxide emissions from their own operations by 2020. Swedavia also makes an active work to promote the shift to bio jet fuel, which is one of the most important measures to reduce the air transport industry’s climate impact. Swedavia’s target is to have five per cent of all fuel used for fuelling at Sweden’s airports be fossil-free by 2025. Since 2016, Swedavia purchases bio fuel equivalent to the amount used in the company’s air travel for business purposes, about 450 tonnes of fuel annually.