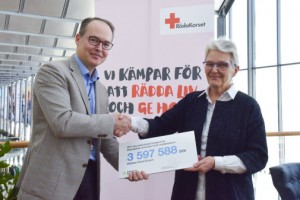 Passengers and employees at Swedavia’s airports donated 3,597,588 kronor in 2017, which is one million kronor more than last year’s fund-raising. The donation was marked with a ceremony on Tuesday, February 27, featuring Swedavia’s chief executive, Jonas Abrahamsson, and the president of the Swedish Red Cross, Margareta Wahlström, at Stockholm Arlanda Airport.

“We are proud of our long-term partnership with the Red Cross. It gives me great pleasure to hand over the donation from our passengers and employees for this important work for people all around the world,” says Jonas Abrahamsson, president and CEO of Swedavia.

The partnership between Swedavia and the Red Cross was launched about ten years ago. Some 100,000 people pass through Swedavia’s airport each day. At five of our airports – Stockholm Arlanda Airport, Göteborg Landvetter Airport, Malmö Airport, Bromma Stockholm Airport and Åre Östersund Airport, they have an opportunity to donate money in a special collection box, in both Swedish and foreign currencies.

“Right now, we see major humanitarian challenges in many parts of the world. Some examples are the war in Syria, the refugee situation in Cox’s Bazar, Bangladesh, and the difficult situation in Yemen. In Sweden, we are working right now to enhance our ability to act in a crisis, in part through our unique partnership with Swedavia involving volunteer crisis supporters. With the money that has been donated, the Red Cross will be able to make sure that even more people in vulnerable situations will have access to shelter, food and medicine,” says Margareta Wahlström, president of the Swedish Red Cross.

Swedavia also donates items left at its airports to the Red Cross for resale if they have not been picked up within three months.

Swedavia is a State-owned group that owns, operates and develops ten airports across Sweden. Our role is to create the access Sweden needs to facilitate travel, business and meetings – in Sweden, in Europe and around the world. Safe, satisfied passengers are the foundation of our business. Swedavia is a world leader in developing airports with the least possible environmental impact. The Group has revenue of over 5.7 billion Swedish kronor and some 3,100 employees.