Taiwan railways back to normal, except tourist trains 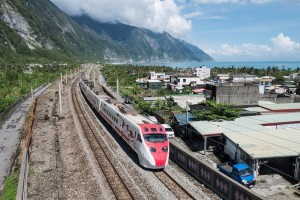 All the railway services in Taiwan gradually returned to normal in the morning today after typhoon Maria passed over northern Taiwan overnight.

The only trains not yet back up to speed were round-the-island tourist trains No 51 and No 52, which will not run today. There was no suspension of service on between Hualien and Taitung on the East Coast Line or on the South-Link Line crossing southern Taiwan because of the storm.

The Railway Administration said ticket refunds are available within a year for train services suspended during the typhoon.

As of 10:00 a.m., local time the devastating Typhoon Maria was 60 kilometers north-northwest of the outlying Matsu Islands moving at a speed of 30 kilometers per hour in a west-northwest direction, according to Central Weather Bureau data.