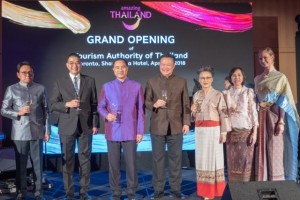 The Tourism Authority of Thailand (TAT) has recently opened its 28th TAT overseas office in Toronto to target the high potential Canadian market. The occasion was also used to launch the “Amazing Thailand’s Open to the New Shades” marketing concept in Canada. The TAT Toronto Office was officially opened on 23 April, 2018.

The official opening ceremony of the TAT’s third office in North America after New York and Los Angeles was attended by H.E. Mr. Maris Sangiampongsa, Ambassador of the Kingdom of Thailand to Canada, Mr. Kalin Sarasin, Chairman of the TAT Board, Mr. Yuthasak Supasorn, TAT Governor, and Mr. Tanes Petsuwan, TAT Deputy Governor for Marketing Communications.

Around 150 guests including Canadian travel companies, travel media, guests from the business community later attended an evening reception which featured a live music performance by famous Thai saxophonist, Mr. Koh Saxman, a demonstration of fruit and vegetable carving, and making of artificial flowers and carps from palm leaves.

In his statement, Mr. Kalin Sarasin (above picture, centre) said, “This is our 28th TAT Overseas office. We chose Toronto, the capital city of Ontario, because it is a vibrant, multi-cultural city and one of the largest metropolitan areas in North America. We believe it will be a perfect location to cover Canada, which has been identified in our current marketing plan as a high potential market with a long average length of stay and strong purchasing power.”

“We are working with local partners to develop new products and introduce new local experiences in Thailand that fit with the targeted segments including the Baby Boomers, Gen X, and Gen Y. They are strongly interested in beach, culture, health and wellness, weddings and honeymoons, and our gastronomical delights,” Mr. Kalin added.

Although there are currently no direct flights from any Canadian city to Bangkok, TAT is working closely with friendly airlines; such as, Cathay Pacific, EVA Airways, Emirates, Qatar, Korean Airlines and Air Canada to route traffic to Thailand via their respective hubs.

At the end of this year, TAT projects revenue growth of 8.46% from the Canada market.

Below pictures show some of the Thai experiences displayed at the TAT Toronto Office’s opening ceremony.