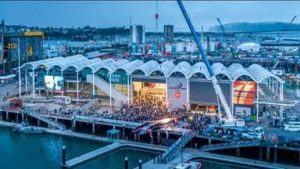 The boat was named Te Aihe (Dolphin) by Marcus Gerbich – member of the MND Foundation – and blessed by Ngāti Whātua, the iwi (tribe) of Tāmaki Makaurau (Auckland).

The name Te Aihe is inspired by the whakatauki (Māori proverb): “Mā te Aihe e tuitui ai i te ngaru moana, mā te Rangatira e tuitui ai i te tangata” which means ‘as the dolphin sows through the seas, so a leader sews people together’.

Emirates Team New Zealand will now focus on a busy period of testing on Auckland’s Hauraki Gulf. The New Zealand spring and summer months will help give the home team the advantage of developing and training on the race area of the America’s Cup which is scheduled to race in March 2021.

Prime Minister Jacinda Ardern attended the event and spoke saying the America’s Cup would provide a huge legacy for Auckland and the country.

“This is a significant occasion for the team, not just because it is another new boat, but really because when we won the America’s Cup in 2017 we very quickly had to come up with a new concept of boat that would really continue to push the boundaries of innovation and technology in the America’s Cup,” Shoebridge said.

It has taken over 100,000 man-hours to design and build the boat with a team of about 65 designers and boat builders who have been working throughout the past year.

Unlike the other main challengers, the entire development of the Emirates Team New Zealand boat – from concept to completion – has relied on in-house simulation as opposed to building a smaller scale test boat to validate concepts on the water. So once the AC75 goes for its maiden sail, it will be the first time the team has collectively sailed since winning the America’s Cup on 26 June, 2017.

“It won’t be without nerves the first time we go sailing, but I am sure that is no different for all of the teams,” said Team New Zealand team member Glenn Ashby.

“The AC75’s are big powerful and fast boats, so they will be a handful, but from our understanding through our simulations they are inherently a safer boat to sail than what we have sailed in the past two America’s Cups.”

Auckland’s Viaduct Harbour will be the hub for visitors to New Zealand for the America’s Cup in 2021. Lined with restaurants, bars and cafes the race atmosphere will bring the city alive and locals are looking forward to welcoming the world to Aotearoa New Zealand.

All in the numbers