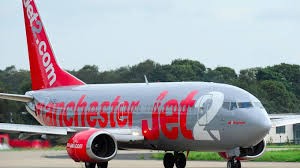 An aircraft of Jet2 had to make an emergency landing at Manchester Airport and was met by police and fire engines this evening.

The Dalaman-bound flight had taken off from Newcastle when it hit technical trouble.

It then landed at Manchester around 5.50 p.m. on Thursday with emergency services that scrambled to the tarmac to meet the 737 aircraft and its 184 passengers.

Manchester Airport had confirmed that aircraft had been able to land safely. The technical issue was to do with a ‘high thrust in one engine’.

A spokeswoman mentioned that the airplane had suffered a ‘minor technical fault’.

She added that flight EXS561 from Newcastle to Dalaman diverted to Manchester Airport this afternoon due to a minor fault indication.

The M.E.N has asked Jet2.com for how long passengers were delayed and how they made their onward journey.

A Greater Manchester Fire and Rescue spokeswoman said: “We were called to the airport at approximately 5.50pm and three fire engines attended as a precaution, two from Wythenshawe and one from Altrincham.