Temperature to further plummet in the U.K. 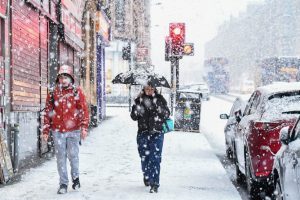 The temperature could plummet to as low as -10C over the next two weeks in the U.K. as freezing fog engulfs the region.

Bitterly-cold weather is in store for the U.K. starting on December 14.

Weather experts have predicted that the north of England will see temperatures falling to around -7C on Sunday, December 15.

The coldest temperature is expected in central Scotland, with fears the mercury could plummet to -10C on Monday, December 16 at midnight.

The temperature is supposed to fall below normal during this period.

The coldest temperature is anticipated in central Scotland, with fears, the mercury could plunge to -10C on Monday, December 16.

Presently, frost surrounds the River Moriston in the Scottish Highlands.

As one goes further north, there is an increased risk of wintry showers.

There is a warning of widespread snow in the North and strong winds across the UK, especially in the south.

Frost and freezing fog are also anticipated, particularly in the North.

A severe yellow warning for fog is also in place in the south-east for today.

Met experts have also warned that Scotland and Northern England is supposed to be hit the hardest, with the worst of the snow expected to settle in the Highlands.

Snow as deep as 10 inches is supposed to cover Scottish Highlands and Inverness by the end of next week, rising to 11 and a half inches by December 18.

A severe yellow warning for rain is also in place for Scotland on Thursday and Friday this week.

Forecasters have warned that a heavy downpour is supposed to create icy conditions particularly dangerous as temperatures plummet below zero.

Besides, thirty to 40 days with snow or ice disruption are expected this winter in Scotland and parts of northern England.

A crippling Arctic blast is the reason for the plummeting temperatures – with fierce snowstorms threatening to blanket Northern regions, and most of Wales.