Thai Airways to ground most aircrafts 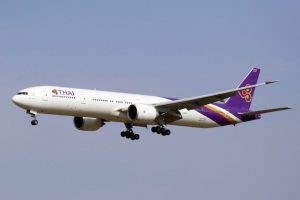 Thailand’s flag carrier, Thai Airways International recently decided to ground 69 out of 82 aircraft in its fleet. The decision arrived in light of the coronavirus pandemic as the airline looks for ways to boost finances amid the crisis.

On Monday, the carrier said in a statement that its budget unit Thai Smile will be exempted from the latest plan. It will continue to operate domestic flights.

However, Thai Airways will continue to operate cargo flights similar to that of other airlines. It has also mentioned in a statement that the carrier is ready to operate repatriation flights to pick up stranded travelers or citizens if required by the government.

Meanwhile, the airline will continue to explore measures that will help it to secure its liquidity during the unprecedented crisis that has caused disruption in the global aviation industry and air travel.

Back during the year 2019, Thai Airways’ revenues fell despite increased passenger numbers and losses widened by Bt3.4 billion to Bt12.4 billion.

Thaworn Senniam, Deputy Transport Minister, Thailand said in a recent press statement that the airline is considering selling and leasing back aircraft. It can also adapt other forms of capital injections as required. He added that the carrier may even ground some aircraft types permanently.

He mentioned that the carrier has to reduce aircraft types in order to reduce costs. He also said that there is a possibility of taking out old aircraft and replacing them with new ones through leasing or other procurement methods.

Low-cost rival of the carrier, Thai AirAsia has also said it will halt all domestic services during the month of April. It has already suspended international flights since March 22nd 2020.

On the team front, Thai Airways disclosed that Pongchai Amatanon has resigned from the board of directors on March 28th 2020. This follows the resignation of President Sumeth Damrongchaitham earlier in March, who is set to officially leave office on April 11th 2020.