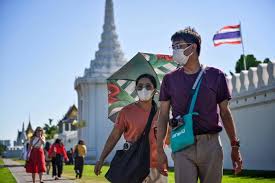 Thailand’s stock market tumbled on the prospect of economic turbulence after China banned outbound group tours to check the spread of the new corona virus that has affected thousands of people.

Tourism shares bore the brunt of the drop. The baht weakened in line with emerging-market currencies over apprehensions regarding the fallout from the virus.

Chinese holidaymakers, many of who came on group tours, spent around $18 billion in Thailand last year, which is more than a quarter of all foreign tourism receipts. The industry as a whole contributes 21% to gross domestic product, as per the World Travel & Tourism Council.

“There’s going to be a significant drop in the number of Chinese coming to Thailand in what should be a peak period,” said Win Udomrachtavanich, chairman of Ktb Securities (Thailand) Pcl in Bangkok.

Both tourism and exports are already under pressure from a surge in the Thai currency. Disorder over the annual budget is another impediment for growth.

In the last few months, the Thai government has rolled out more than $10 billion of stimulus steps to cushion the economy, which the Bank of Thailand estimates expanded at the weakest speed in five years in 2019.

The new corona virus has originated in China, and thus, many nations have diagnosed the infection in travelers from China.

So far, Thailand has confirmed eight cases, with five already discharged and the remainder hospitalized. Officials said that around 48 people are being monitored for possible infection.