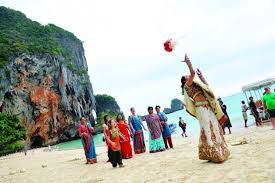 Thailand has broken its annual tourism record with the arrival of more than 39 million international tourists this year, up from about 38 million last year. The 39 millionth tourist was from Russia. The Tourism and Sports Minister Phiphat Ratchakitprakarn said that the kingdom of Thailand remains one of the all-time favourite destinations of global travellers.

In the closing days of 2019, 140,000 tourists are expected to arrive every day, which means that Thailand is expecting to welcome a total of 39.6 million to 39.8 million tourists by year-end.

Anna Pavlovskaya, who was travelling to Thailand with her family for the third time, said that besides tourist destinations, Thai people and their hospitality were big reasons for her return to Thailand after her first visit 21 years ago to Koh Samui in Surat Thani province.

According to the Tourism and Sports Ministry, the number of foreign arrivals during January to November this year stood at 35.87 million — an increase of 4.44% year-on-year — and generated 1.74 trillion baht in income, up by 3.67% from the year before.

This year, the Tourism Authority of Thailand (TAT) is expecting Thai tourism to achieve a growth rate of 4% in both volume and value to 39.7 million foreign tourists which will generate 1.96 trillion in income for the country.

The tourism agency forecasts the number of tourists will reach 40.8 million in 2020, an increase of 2.5%, which will contribute 2.02 trillion baht to the economy, up 3% year-on-year.

Srisuda Wanapinyosak, TAT deputy governor for Europe, Africa, the Middle East and the Americas said that for the Russian market, one of the most important for Thai tourism, the Tourism Authority of Thailand is hoping to attract more tourists by reaching new cities such as Vladivostok, Irkutsk, Yekaterinburg, and Novosibirsk via charter flights by next year.

This year, the number of Russian visitors hit 1.47 million, similar to last year, despite predictions that tourism revenue from this market would drop by 1% to 100 billion baht. Ms Srisuda said Thailand experienced an uncontrollable challenge at the beginning of this year as the country’s southern provinces, which host popular beach destinations, were affected by Tropical Storm Pabuk.

The numbers from the Russian market were also predicted to decrease due to the country’s economic situation and the strong baht which led many Russians to choose short-haul destinations like Turkey instead.