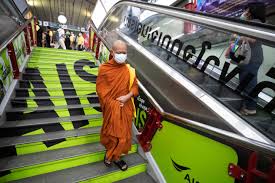 With tourism accounting for 14 per cent of gross domestic product (GDP) and employing one in six, the Thai economy is now hit hard by COVID-19. On January 13, Thailand became one of the first countries outside China to confirm a case of the virus. After six weeks, 30 of the 43 confirmed cases in Thailand have recovered, but the economic position is depressing.

The Bank of Thailand is talking openly about two negative quarters, and warning about deteriorating employment. Business confidence is down to its lowest level since 2011, when GDP growth went down 0.8 per cent in the wake of the catastrophic floods.

Tourist arrivals are down 40 per cent in February and are expected to drop further this month and in April. At the Grand Palace in central Bangkok, and the nearby Wat Pho temple, the crowds have vanished.

The lack of queues is great for the remaining travelers, but disastrous for the thousands of Thais including shopkeepers, water-sellers, tourist guides and the drivers who depend on new sales each day.

Improvement looks bleak. Mass events attracting crowds have disappeared from the calendar. Thailand’s Event Management Association (EMA) estimates that 90 per cent of plans have been suspended, including the two-day Grand Prix that was to run later this month.

EMA President Upathm Nisitsukcharoen has warned that at least 50 event organizers will face consequences if the epidemic continues into the second half of this year.

Even if the COVID-19 outbreak is visible in the second quarter, Citi analysts opine that tourism numbers won’t recover till 2021.

The Centara Hotels and Resorts Group operating around 40 properties across Thailand has already asked its staff to take voluntary leave without pay. Other employers are poised to do the same.

“We were expecting a rebound in 2020. Now we expect a further slowdown,” Mr. Langham said.