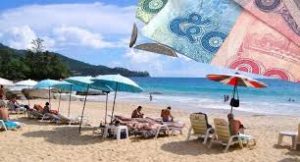 Thailand hopes to receive 40 million visitors this year. Most of the travellers to Thailand are from China and other countries in the region, but millions also come from Europe and the U.S. and currency conversion rates impact decisions when budgeting for trips.

Before the baht strengthened, Chinese visits were already flagging after a boating disaster in Phuket last year killed dozens of mainland tourists. The visits from China fell almost five percent in the first six months of the year compared to the same period in 2018. The past surges are also unlikely to repeat. Last year total visits from all countries rose more than 7.5% compared to 2017. But after the first half of this year the increase was only climbing towards 1.5%.

The tourism and currency woes weighed on economic growth, which slid to 2.3% in the second quarter this year – the lowest in almost five years. US-China trade tensions have roiled markets but Thailand has been less impacted than other countries in the region that have more exposure to global supply chains.

Most of the solid fundamentals, such as healthy foreign-exchange reserves and a current-account surplus, have also helped the Thai unit.

Thailand proposed a $10 billion economic stimulus package that included spending money to boost domestic tourism and visa-free proposals for Chinese as well as Indian travellers, whom travel operators are hoping to court.

This measure will make it an easier decision for tourists in those two main markets (to visit Thailand),” said Chattan Kunjara Na Ayudhya, the deputy governor of international marketing for the tourism authority.

Conceding there might be some impact of a stronger baht on hotels and shopping, he said he was confident more visitors would come this year due to relaxed visa rules. Thailand is still a relatively inexpensive destination with picture-perfect beaches and world-famous street food.