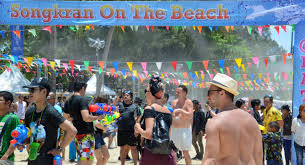 Tourism revenue earned from international visitor arrivals to Thailand and domestic trips during the 2019 Songkran holiday all showed year-on-year increases over the same period in 2018, the Tourism Authority of Thailand (TAT) has revealed.

“During the holiday period of 12-16 April, 2019, total revenue from the international arrivals and domestic trips amounted to 22.07 billion Baht, an increase of 15 percent year-on-year,” TAT Governor Yuthasak Supasorn said.

The number of international arrivals reached 543,300 (up eight percent year-on-year) and generated revenue of 10.23 billion Baht (up 14 percent). There were 3.27 million trips by domestic tourists (up three percent) generating 11.84 billion Baht (up seven percent).

The East Asia market accounted for the majority of foreign arrivals during the Songkran Festival. Arrivals from Hong Kong and India were higher than expected thanks to the visa-on-arrival fee waiver in place. The domestic market also performed close to the expectation.