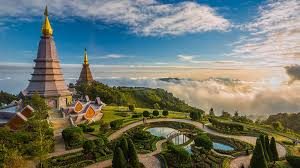 Chiang Mai in Thailand has seen some changes recently, especially in the type, behaviour and nationality of tourists, Pakkanan Winijchai, director of the Chiang Mai branch of the Tourism Authority of Thailand, said.

The number of independent tourists visiting the northern city has been rising gradually though the number of group tourists dropped slightly after a boat accident in Phuket killed 47 tourists in July.

The 60:40 ratio of independent and group tourists over the past few years has changed to 70:30, Pakkanan added.  She explained that the increasing number of free independent travellers included domestic tourists as well as foreigners, especially those from Europe, Australia and India.

The director, who was posted in Chiang Mai two months ago, said the city seems to have become more popular among Europeans, especially Italians and from German-speaking countries, as well as Russians.  Also, some nationalities visit Chiang Mai more often and during specific seasons.

For instance, the people of Israeli usually prefer to come during the rainy season to enjoy the sound of rain and waterfalls, as their country is more prone to droughts. But now, many of them also visit during the winter season.

Last year, Chiang Mai welcomed around 10 million tourists, 7 million of whom were locals and 3 million foreigners, Pakkanan said. Of the foreigners, 1 million were Chinese.

However the number of Chinese tourists dropped after the boat accident. As of November, tourist arrivals to Thailand had reached 34.43 million, up 7.53 per cent, generating an estimated Bt1.8 trillion in tourism revenue, up by 9.79 per cent, over the same period in 2017.

China still led the list with the 10 millionth tourist arriving in the Kingdom last week.Pakkanan said Chinese tourists have gradually started returning to Chiang Mai, thanks to new flights being added to the Beijing-Chiang Mai route, bringing the number of flights up to seven daily.

The TAT’s Beijing office reported that the trend of big tour groups has changed to small groups comprising six or seven travellers.